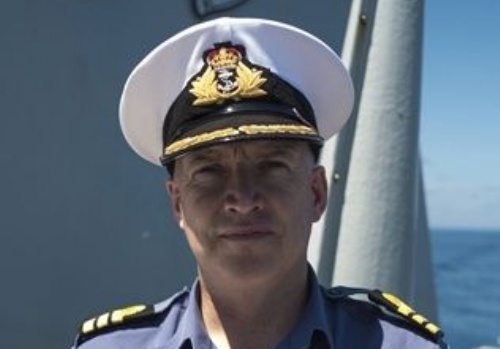 Military Experience Born in Durham and educated at Newcastle and Leicester Royal Grammar Schools, Phillip Newell joined the Royal Navy as a direct graduate entry Warfare Officer in 1992. Following basic training he undertook specialist hydrographic training at HMS DRAKE in 1994, followed by an appointment to HMS HECLA, conducting geophysical surveys in the North Atlantic, Indian Ocean, Mediterranean and the Gulf. Between 1997 and 1999 he was appointed to HMS SCOTT as alternate Operations Officer. This period encompassed commissioning, Capability Acceptance Trials off Florida and completion of the first operational surveys by HMS SCOTT in the North Atlantic.

Qualifying on Advanced Survey Course at the RN Hydrographic School, he completed a Post graduate Diploma in Hydrographic Surveying from Plymouth University. On completion, he was given the opportunity to spend 2 years on exchange with the Royal Australian Navy (RAN) appointed to HMAS LEEUWIN as Senior Assistant Surveyor. This period included commissioning, acceptance trials off Cairns and completion of the first operational surveys off the Great Barrier Reef. He was awarded a RAN Fleet Commander’s commendation for valuable service.

On return to the UK, he was appointed to Devonport as Staff Officer Operations to Captain H, responsible for the operational programming and co-ordination of the RN survey squadron. During this period, he developed a comprehensive trials package for the acceptance of HMS ECHO and ENTERPRISE into service.

After short appointment working in Defence Intelligence in Feltham, between 2004 and 2006 he was selected as Executive Officer of HMS ECHO. In temporary command he conducting surveys in the Mediterranean, UK and around the Iraqi oil platforms in the Northern Arabian Gulf. He led the successful introduction of the Joint Personnel Administration project in Devonport, as part of a wider project of implementation across the Royal Navy.

Working in London for the Defence Intelligence, he was responsible for strategic direction for RN hydrographic surveys and management of the UKHO Defence Section between 2007 and 2009. This included a short period in Defence Procurement responsible for the introduction of Environmental Risk Management Tool (Sonar 2117).

He was selected for a second appointment as Executive Officer on board HMS SCOTT taking periods of temporary command between 2010 and 2012. He successfully deployed to Antarctica in support of FCO tasking and conducted deep water surveys in the North Atlantic. During this period, he was selected for the Advanced Command and Staff Course which he completed in 2013. He was selected for promotion to Commander in 2013, completed an MSc in Hydrography at Plymouth University and returned to HMS ECHO for his third Sea Command.