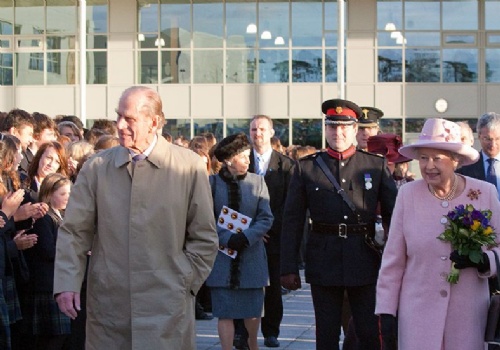 It was with great sadness that we learned of Prince Philip's death last week. He is fondly remembered by those staff and trustees who were privileged to be at Leicester Grammar School for either or both of his two visits.

He came first to the old school alongside the cathedral in February 1999 and then accompanied Her Majesty The Queen for the official opening of the current school in Great Glen in December 2008. He was naturally friendly as well as interested in all those he met, rapidly putting pupils at ease when he congratulated them on their participation in Young Enterprise or in the Duke of Edinburgh's Award. His own example of service to others has inspired thousands of LGS pupils who have completed the Award.

We shall pause to remember His Royal Highness during our Easter service tomorrow and shall also pray for Her Majesty The Queen and the Royal Family in their loss.